Join us for our Executive Panel Discussion where we will discuss the virtues of charity, temperance, and prudence.  We'll look at how these virtues played a role in the life of the Holy Family.  Through this lens, we can discover how we can more fully live these virtues in our life. 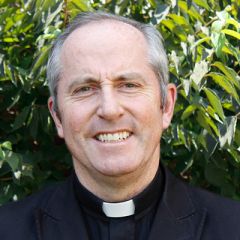 Fr Martin Connor, LC, born in Baltimore MD, grew up near Annapolis, one of eight children, the last two of which are Legionary priests.Entered the Legionaries of Christ in 1990 after graduating from Boston College with degrees in Philosophy and Theology. He also holds degrees in Philosophy and Theology from the Pontifical Atheneum Regina Apostolorum in Rome. Ordained to the priesthood in January 2001 in Rome with his brother Fr John Connor LC. Spent his first 7 years of his priesthood in Dublin Ireland where he was chaplain to a School and Director of a Family Center and taught extensively on Theology of the Body. From 2007-2010 he worked as chaplain to the Youth programs of Regnum Christi that run in Northern Ohio and Indiana and Michigan. Since 2011 he has been part of the national Clergy board of the Institute of Theology of the Body Institute in Philadelphia. He is currently working in Atlanta, GA as the LC National Vocations Director.  His new book on dating written with a team of young adults will be out by summer.

Bruce and Marybel Carlisle have been married in 1984, 36 years ago and they dated 8 years prior starting when they were both 15 years old.  Marybel is from Bogota, Colombia and Bruce is a native Atlantan.  They have two children, Marina and Zach.  Marina is 29 and just got married in October 2020 and Zach is 30 and is single.  Bruce is a convert to the faith since 1987 and Marybel is a cradle Catholic. They began presenting marriage prep courses in 1987 and have continued to be involved in marriage enrichment retreats.  Marybel is a Registered Dental Hygienist and Bruce owns a Commercial Real Estate firm specializing in land brokerage.  They live in Cumming ,Ga and attend Saint Brendan's Catholic Church